One of the big benefits of using an expert advisor (EA) for your Forex trading is that your profit making ability becomes automatic, and ProfitStream is no exception. An EA is helpful because it eliminates human error on your end. Of course, there can be mistakes made by the programmers and others behind the EA you use, but the best software keeps these to a minimum. If you do use one of these, robots, then you need to make sure that they are successful. Your success depends on their success.

This is where Profit Stream excels. Over the last five years, they’ve shown a profit each year, averaging about 75 percent in returns per year. When you consider that 90 percent of the retail traders in the Forex market will go broke in four years or less, the fact that this software program can double your money in less two years is extremely impressive. The fact that it’s automatic and requires little effort on your part makes it even more useful. All you need to do is set up your account, select which currency pairs you want to focus on, and select your risk percentage. This varies based upon the home account (the computer’s), and you can take on as little as 1 percent of this risk, or as much as 300 percent. Once you’ve done these things, you’ll definitely want to monitor things often, but the amount of work necessary will be very little. 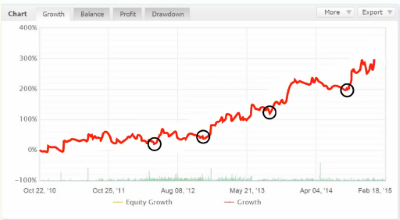 The average trader’s day will have ups and downs, and there will be streaks of just one or the other interspersed within. You will see your trading account go up a bit, then drop. However, because you’re fighting against the spread, the average trader will lose their money slowly and steadily over time. It’s just a fraction of a penny for each dollar traded, but it adds up to a lot, and if you are only right 50 percent of the time, then you’ll end up losing all of your money.

To beat the Forex markets, you need to place your money on the trades that the average retail traders are not making. Institutional investors have been shown to be profitable over the long haul, but this is because they have powerful algorithms working for them. This is what ProfitStream focuses on. They use methods of detection so that you are actually placing trades in the exact opposite manner that most retail traders are doing. Because they are often incorrect, this means that going against them will end up being correct. It does go against popular sentiment, but it does it by going against a specific type of sentiment, and it ends up creating a profit at the same time.

By turning your losses into profits, you open up many doors for yourself. You can retire earlier, live a more luxurious lifestyle, whatever you desire to do within your new found means. You are trading to make money, so you might as well give yourself the edge necessary to be profitable over the course of years, and not put yourself in a position to lose everything. You will still have ups and downs, but you’re not going to find yourself in the red, year after year. Your profits will be consistent, and they will end up as a positive if you keep your risk levels manageable the entire time. Instead of relying on methods that just don’t work, by using a top rated EA like ProfitStream to do the work for you, you eliminate using your emotions and faulty reasoning methods to make trades, but you can now use similar software to what the best banks in the world use to make money.