The Nikkei 225 is one of many indices that binary options traders can trade with. This index is the principal stock exchange in Japan, which means that to be able to have an understanding of how it operates, traders will need to become familiar with basics of the Japanese economy. It is also important to understand the link between this economy and the U.S. economy. The good news is that with just a basic understanding of the inner workings of this major economy, the Nikkei 225 can be traded with successfully.

Frequently, the Nikkei 225 performs in the same way as the Dow Jones Industrial Average during the previous day. This understanding by itself can provide traders with a good amount of profit. In many ways, it’s like having news for the following day arrive one day early. Even so, there are additional U.S. economic factors to take into consideration, such as NFP data, GDP, retail sales, manufacturing data, and more. Of those, the NFP (Non-Farm Payroll) report has a tendency to have the most significant influence on the value of the Nikkei 225. 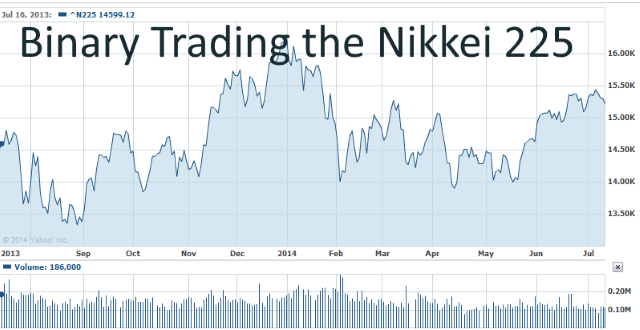 Both the GDP and retail sales numbers do disclose general U.S. economic conditions, as well as how healthy the economy actually is. Remember that the United States is Japan’s leading trade partner. Whenever U.S. economic conditions are poor, there will be a reduction in import levels coming from Japan. When this happens, there will be a reduction in the sales of Japanese merchandise that is marketed to U.S. consumers, thus impacting the Nikkei 225. Truly, the link between the U.S. and Japanese market cannot be overstated.

Those who trade binary options should watch for unfavorable GDP and retail sales data, as each usually leads to active selling on Wall Street. Once this starts to happen, active selling inside the Nikkei 225 is likely to occur. Alternately, a favorable GDP and retail sales data is likely to lead to increases in value for both the Dow Jones Industrial Average and the Nikkei 225. Traders should look for the same outcome to arise whenever consumer sentiment data and manufacturing data is released in the U.S.

The most basic method for trading with this index would be to analyze Dow market performance and then use this information to enter into trades just as the Nikkei 225 is opening for the day. As the session progresses, other factors will come into play, making it more difficult to forecast the movement. Early trading is best because U.S. market performance from the previous day is likely to provide an exact forecast for trading with the Nikkei 225 within a binary options platform the following day.